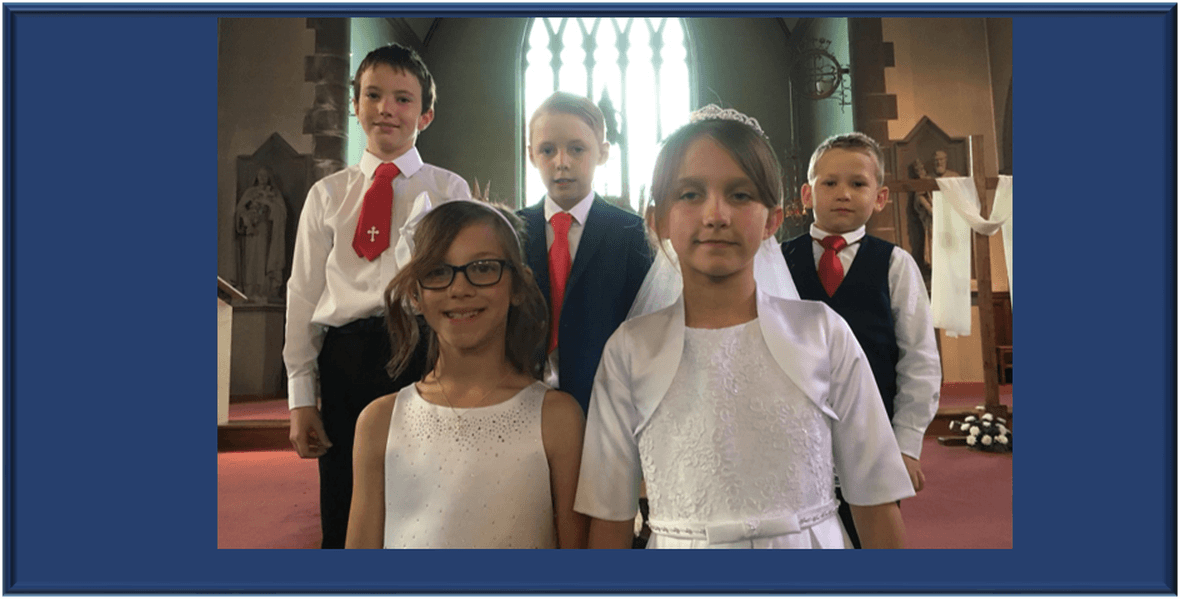 SACRED HEART is a Catholic School under the trusteeship of the Archdiocese of Liverpool. It is maintained by Wigan Council. As a Voluntary Aided School, the Governing Body is the Admissions Authority and is responsible for taking decisions on applications for admissions. The co-ordination of admissions arrangements is undertaken by the Local Authority. For the school’s year commencing September 2020, the Governing Body has set its admissions number at 45.

Our principal role as a Catholic school is to participate in the mission of the Catholic Church by providing a framework which will help children to grow in their understanding of the Good News and in the practice of their faith. The school will help the children develop fully as human beings and prepare them to undertake their responsibilities as Catholic in society. The school asks all parents applying for a place here to respect this ethos and its importance to the school community. This does not affect the rights of parents who are not of the faith of this school to apply for and be considered for a place here.

ADMISSIONS TO THE SCHOOL will be determined by the Governing Body. Parents must complete a Local Authority Preference Form or apply online via the website www.wigan.gov.uk following the links. If you wish to have your application considered against that school's faith/denomination criteria then you should ALSO complete the Supplementary Form which is available from the Local Authority and the school. All preferences listed will be considered on an equal basis and, where there are more applications than the number of places available, the following set of OVERSUBSCRIPTION CRITERIA will be applied:

If it is not possible to offer places for all applications within any criteria above then places will be allocated to the children who live nearest to the school. The distance will be measured in a straight line from the child’s home address to a central point at the school using Wigan Council’s Geographical Information System (GIS) which is based on ordnance survey. In the event of distances being the same for two or more applicants where this distance would be last place/s to be allocated, we will use a system to randomly pick who will be offered a place.

Children with a Statement of Special Educational Needs or Education Health Care Plan that names a school will be offered place without using the admission criteria and will count as part of the school’s published admission number.

b. A Looked After Child is a child who is (a) in the care of a Local Authority, or (b) being provided with accommodation by a Local Authority in the exercise of their Social Services functions (under section 22(1) of the Children Act 1989. A previously Looked After Child is one who immediately moved on from that status after becoming subject to an adoption, child arrangements order or special guardianship order.

A child is regarded as having been in state care in a place outside of England if they were                   accommodated by a public authority, a religious organisation or any other provider of care whose sole     purpose is to benefit society. Applications must be supported with appropriate evidence that the child   has been adopted from state care.

c. For a child to be considered as a Catholic evidence of a Catholic Baptism is required. Baptism should take place before the closing date for applications.

A Baptised Catholic can also be defined as one who has been baptised by the Rites of Baptism of one  of the various Churches in communion with the See of Rome (cf Catechism of the Catholic Church 1203). Written evidence of this baptism can be obtained by recourse to the Baptismal Registers of the church in which the baptism took place.

The Governing Body will require written evidence in the form of a Certificate of Reception before applications for school places can be considered for categories of ‘Baptised Catholics’. A Certificate of Reception is to include full name, date of birth, date of reception and parent(s) name(s). The certificate must also show that it is copied from the records kept by the place of reception.

Those who have difficulty obtaining written evidence of baptism for a good reason, may still be considered as baptised Catholics but only after they have been referred to the parish priest who after consulting with the Episcopal Vicar, will decide how the question of baptism is to be resolved and how written evidence is to be produced in accordance with the law of the Church.

d. Home Address is considered to be the address where the child normally lives. Where care is split and a child moves between two addresses, the household in receipt of the child benefit would normally be the address used but the admission body reserve the right to request other proofs as fit the individual circumstance. Applicants should not state a childminder’s or other relative’s address.

g.  For ‘In Year’ applications received outside the normal admissions round, if places are available they will be offered to those who apply. If there are places available but more applicants than places then the published oversubscription criteria for the relevant year group will be applied. A waiting list for those who have not been offered a place will be kept until the end of the relevant academic term.

h. If an application for admission has been turned down by the Governing Body, parents can appeal to an Independent Appeals Panel. Parents must be allowed at least twenty school days from the date of notification that their application was unsuccessful to submit that appeal. Parents must give reasons for appealing in writing and the decision of the Appeals Panel is binding on the Governors.

i. The Governing Body reserve the right to withdraw the offer of a school place where false evidence is received in relation to the application.

j. It is the duty of governors to comply with regulations on class size limits at Foundation Stage and Key Stage One. The Governing Body may exceed the regulations for twins and children from multiple births where one of the children is the 30th child admitted. This also applies to in-year applicants who are looked after/previously looked after, children of UK service personnel or children who move into the area for whom there is no other school available within a reasonable distance.

k. If a child is a “summer born child”, parents can request that the date their child is admitted to school is deferred to later in the school year. However, an application must be made for a place for the relevant September intake and the child has to start school before the end of that school year.

Where entry is deferred, the school will hold the place for that child and not offer it to another child during the remainder of the school year.

Parents cannot defer entry beyond the term after the child’s fifth birthday, nor beyond the academic year for which the original application was accepted.

Parents can also request that their child attends part-time until their child reaches compulsory school age.

Parents of a summer born child, born between April and August, may choose not to send that child to school until the September following their fifth birthday. The expectation would be that parents have decided that their child miss the reception year and would be applying for a year 1 place, depending upon availability.

l. If a parent wishes their child to be educated out of their normal age group (e.g. if the child is gifted and talented or has experienced problems such as ill health or is a summer born child) they must discuss this with the school before applying for a place. The decision rests with the school as admission authority as per para 2.17 of the Admissions Code. If there is more than one application for an available place reference will be made to the oversubscription criteria.